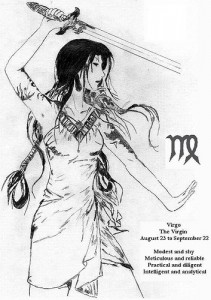 If you have noticed that Virgos have been gathering lately, that is probably of no coincidence. Virgos are standing at the front line with the message clear for all – serve the humanity and find your life purpose.

Virgo is the sixth sign of the Zodiac and basically represents the principle of harvest of all the efforts of contribution to the mankind, with the emphasis on duty, hard work, raising awareness on personal responsibility for general well being. The glorious strive for perfection. Self-improvement and personal development: so popular, raising-eyebrow issues that represent the imperative of the modern world implying at what you can do on a regular basis in order to improve your life and make the world a better place. Virgo issues.

The recent, apparent movement of the fixed star Regulus “The Lion’s Heart” into the sign of Virgo, also known as “The Archangel Raphael – Watcher of the North”, is generally the sign of incoming time when environmental issues, health issues and general well-being take the central role in people’s lives. There has been an underlying “switch” from ego-centered perception of the world to the general benevolence and personal growth i.e. overcoming of ego and spirituality as the healing force. So many spiritual techniques of preservation of energy that has been brought up into the spotlight, the Holistic principle of unity of the Universe in a single drop, new discoveries and ways of treating illnesses. Spirituality, education, culture seems to be an imperative of life in order to preserve the mind and the body from decaying of contemporary world,  thus imposing habits that save lives. Karma is no longer a mystery and it becomes clear that the key of the harvest is the healthy seed.

It is not accidental that Vesta asteroid, the Greek Goddess of Vestal virgins is the keeper of the Eternal Flame on Mt. Olympus, thus preserving the Eternal Truth of the soul. Personal and general purification, commitment to the highest performance of one’s own life, the quest for purpose. Vestal virgins were known for speaking the truth and were honored as guardians of people taking care of fulfillment of the holy mission of the soul.

Ceres, as non-the-less-important asteroid also has a very important drive for nurturing, raising awareness on personal as well as environmental issues in the symbolism of Virgo that has the aim to awaken individual and collective responsibility for the way of life and one’s own choices. Raising awareness of the importance of energetic well-being is basically in the root of building up healthy habits along with applying techniques of self-preservation for the sake of healthy energy remittance. That’s why Virgo is the most contemporary, new age sign.

What seems to be the strongest argument of this point of view is the position of SCG – Super Galactic Center of the Milky Way Galaxy  that represents the spiritual galactic center in the constellation of Virgo. What seems to be life-saving force is exactly the Virgo influence, applied in every-day practice.

Probably the reason why the fixed star Spica of the constellation of Virgo, on the Virgin’s left hand is called “Empress” by the Kabalists.

All in all, Virgo has always been the most civilized sign, representing culture along with all cultural accomplishments of the world, the sign of literature, enlightenment and education. The ruling planet Mercury is well known messenger of God that rules human mind, thoughts, speech, language and craftsmanship. As if the general contribution to creating of Culture is in the symbolism of this sign.

“I analyze” is the key word of Virgo and basically all the prep work before the synthesis is exactly the gift of Mercury. Producing premises in the syllogism is well-done job, the conclusion is yours. Virgo @ saving the world.