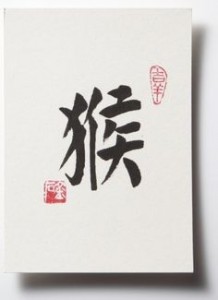 30th January 2016 at the doorstep of the Year of the Fire Monkey. The psychology of  the Chinese sign of the Monkey is a very interesting phenomenology  of the archetype in the collective unconscious in Chinese and Japanese mythology.

Some would quote Henry James in here in the Madonna of the Future “ Cats and Monkeys – Monkeys and Cats – all human life is there!”, however let’s make an effort to contribute to the kaleidoscope of the astrological interpretation of this complex and ingenious sign.

Monkeys are known for their intelligence in the first place, manageability and playfulness with the exclusively one purpose: getting the business done. In the psychology of the Monkeys, the unconscious impulses are being lead by the tendency to accomplish some, very often, practical goals, realize ambitions and make a breakthrough in the area of influence within the professional background.  If you care for a good manager, hire a Monkey and he would do the best work in organizing, multitasking, coordinating, networking and communicating with the utmost success. Those people are really know-how and very often without even being able to provide a recipe or a piece of advice. Monkeys do it without even planning to do it, it is the opportunistic skill of making the most of a situation.  Improvisation is just a challenge they meet with success. Rarely you will meet the Monkey that is not successful, merely be the reason of not being motivated enough  or having the preferable priorities  to satisfy oneself with, but even then the Monkeys feel themselves as  being successful in what they want to accomplish.

They say that the head of the Monkey is always mesmerized with thoughts and impressions of the outer world, so intelligently processed, being the subject of enjoyment. Mind games, puzzles, difficult  entanglements of any kind, are just the challenge of this ingenious creature that is never at peace and always  seeks the resolution of an issue. Monkeys don’t stand still, but are always pushing things forward, constantly searching for that very something that might be the bridge over the troubled waters and  eventually find it.

In the psycho-dynamics of everyday life, personal relationships and intimate cravings,  the period from 2012 up to 2016 was the time that initiated the seismic activity within the psyche, reflected mostly on the personal lives of people who barely managed to secure the relationships if they managed to do it at all. Break-ups and complicated circumstances evoked the re-examination of the past choices that actually brought you there when the overall dissatisfaction of Uranus-Pluto Square called for immediate self-improvement for the sake of overcoming the discontent i.e. personal issues of suppressed fears, complexes and prejudice that needed to be purified in this four years time. In case you have been intensively working out your own issues that actually took place as difficulties in your love life from the perspective of self-improvement, now you might stand the chance to pick-up where you have started. Monkeys have fantastic intuition and very often sense the right thing-to-do-in-the circumstances without being able to rationalize on it and the very incomprehensible feeling might just manage to turn you around towards the person who might be the right one or the one of the greatest benefit.

In any case, you might just monkey your way to happiness, now that Uranus-Pluto Square finishes and the time for happiness comes. In case you have already settled your personal issues with that special someone, this year might bring you the mutual productivity and the couples might generally prosper for what they have been trying to accomplish for a long time. What’s the most important, the playful Monkey might shake off the chills of suppressed anxiety, present throughout these years, and step into the zone of all-so-loving-games with the accumulated experience of accurately figured out game set developments for the sake of realizing there is only one love that is important – The Self-Love. It represents the base of a healthy character and healthy relationships. For all the gamers that seek to enjoy the life this year, the playful Monkey might bring various opportunities, the Fire Monkey often creates himself, for the sake of so precious – The Spark. For the sake of the argument 2016th  might as well be sparkling enough. Knock yourself out and “feed the Monkey”.

If we could depict the Monkey in just one word it would be – SURVIVOR. Namely, it is considered that in the full wagon of people who get killed, the Monkey survives. The famous Shakespearean quote – It’s going to turn out well in the end. How? It’s a mystery! – would be he the typical description of a life of the Monkey. Either this fascinating creature is in the blissful favor of God or it is just the unbeatable skill of having its way with what often called “monkey business” turns out to be success in the end.

This year brings out the Monkey in all of us to play for the sake of ongoing businesses in particular, that might have been brewing in the previous years or the ones we are seeking resolution for. It seems that the world will be super busy this year when everyone should get the chance to get a “piece of cake”.  Monkeys  will probably have the chance to have the whole cake for themselves, they have been baking for so long and the quality of that entrepreneurial  energy might mark the entire year.

The irresistible impression of the spirit of the Monkey year resembles the Defoe’s “Robinson Crusoe” for what actually  was in the 18th Century when the seed of the Economic man was planted as the essence of Capitalism and Entrepreneurship. The awareness of the personal responsibility of one’s own accomplishment in life as the realization of one’s own personal potential that lies n the hands of the individual. In the spirit of Mars in Scorpio’s Power Games on the worldly scale until July, the burning necessity of the Fire Monkey is exactly to get in the game of realization of the Personal Power by raising awareness on personal capability and responsibility for one’s own accomplishments and ultimately success.  The Man, alone with the Universe represented as the Survivor in the wilderness  is challenged to secure one’s own existence by means of personal manageability of the Monkey that has only oneself in the battle of life for what it wants to be and for what it wants to have, without relying on anybody else who might bring the well-being on a silver plate.

In the era when people tend to become unbearably cheap and the money highly expensive, with the full respect for Individualism,  being built on the awareness of one’s own personal potential and self-consciousness, in the frame of the cross-examination on a worldly scale through Saturn in Sagittarius for the sake of re-establishing the real values stimulated by Jupiter in Virgo, the keys of your own destiny are exclusively in your hands for what you want to become. The highest quality involves the highest values Jupiter in Virgo is calling for to establish. In case you have already accomplished the balance between old-school and the new school, individualized enough to know who you are and self-improved enough to be able to perform brilliance, the year of the Fire Monkey Call is here – Get in the Game for You are the Business!