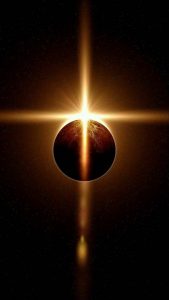 There is a shift in consciousness whereupon the the unconscious speaks up for the sake of faving the truth about oneself. A critical piece of information or a small revelation takes place for the sake of integrating the shadow thus bringing it to consciousness. Every Eclipse is the shift of trend so there might be an overturn of energies within the psyche in the next six months. Waking up and realizing the truth about the ongoing matters particularly the truth about oneself as well as one’s own motives would be the ultimate aim of this Eclipse as the best case scenario, if you are not into the search for the truth rationally the prevailing emotion and the sensation of your own truth will take place, the gut feeling never lies so as the basic instinct for survival withstands the shocking revelation of one’s own state of affairs, shadow snares or battlefield disposition thus exposing the true motivation of everybody in the equasion, The lucid Scorpio will enable you to face it all and gain the power you need to secure well-being and establish control. This Scorpio season might drive you to the extremes and this Evlipse would be the first turnover hopefully for the best and this little shake-up will wake you up enough to make things right and to face the shadow.
#solareclipse #solareclipseinscotpio #scorpioseason #newmoon