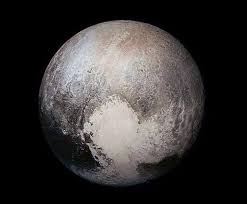 The latest caption of the dwarf planet Pluto out there in space with the unassumingly well-shaped heart on the surface made of ice and rock of the slightly nuanced orange, black and white color. The geology of substances such as nitrogen, methane and carbon monoxide alchemically reveal as well the possible toxic influence in the psychological history of mankind, being more than 10 million years old as a matter of fact.
Being known as Hades in the Greek mythology as the god of the underground, death, resurrection, the ruling planet of Scorpio within the realm of the Dragon, the Phoenix bird, flying over the river Styx where all the dead are being transferred to the other side, Pluto has always been associated with the mystery of life, the hidden, the occult, the Fatale manifestations in the life of the individual.

The depth of Plutonic fierce impulses that shake the very core of the psyche, the Plutonic insights that reach the bottom line in all the matters of the world, being the psychology, the research, the surgery, the mysterious and occult knowledge, the multi-million business and the stock market, the oil market, the military and the firearms, the war, the secret societies, the espionage, the mob, the underground, the fatalism, the destiny, the power.
Perfectly well shaped heart made of ice on this uncompromising warrior – Pluto. The mortal combat known as the Love Fatale. Does it ring the bell? I’m sure you have had this kind of experience of hurricane, tornado, tsunami or better to say the volcano eruption changing your life forever. Or at least you will, sooner or later since Pluto always lurks from beneath the visible.

Pluto is being exalted in Leo, the sign of the heart, physiologically and psychologically, denoting the occurrence of the heart shape on the surface is hardly accidental, meaning that Pluto finds its ultimate expression of potency through the sign of Leo i.e. the heart.

In the astrological heritage, the Pluto, being the ruler of Scorpio, represents the Eros, the libido, the sexual potency and what is more, the overall psychological energy there is, the concept being established by the Carl Gustav Jung. Hungarian-Swiss psychologist Leopold Szondi (Interesting name you would say) by the means of his famous “Szondi Test” has been searching through the world of impulses and basic drives varying from hermaphroditic, sadistic and maniac drive needs just to name a few, in the search of the cause of the basic instincts, or, speaking of drives, the “Will for Power” being established by Friedrich Nietzsche along with the development of the psycho-sexual stages of Sigmund Freud that puts sexuality in the centre of behavioral motivation of the individual, all being the fruit of the ingenious in-depth Plutonic psychology. Pluto exactly endows these researchers the awareness of human motivation being the source of the diverse demonstration of human power.

It is all about sex, they say, except that sex is about power. Who would depict it better, the power games in the Love Fatale encounters with supercharged sexuality, passion and unbreakable heart-bond: The realm of Pluto. When it strikes, the arrow of Love Fatale just doesn’t let go, pumping the fuel of the heart-bond against all the rationalization, conscious choices and common sense. For whatever the normality, sobriety or morality you are being used to, the destructive force of Pluto evokes the primary instincts up on the surface, emanating from the deep-rooted pathological knots of childhood that could drive you up to a tragedy. Dangerous game. It leaves you with that “gotta do it” taste in your mouth. What is certain is the uncontrollable element of desire, fascination, obsession that just might turn into a target forming, blood-thirsty urge that easily turns love into hate. The war of love or the Power Games. Someone said sometime that Love is exactly the trial of strength between two people in the battle for dominance, with the aim of eventually winning supremacy. However, very often it seems the battle is just being conveyed within oneself.

Namely, the Pluto encounters essentially represent “meeting a shadow” i.e. that very loving someone that represents the “shadow” of oneself, revealing that the battle actually takes place in the psyche. For all the blame you place on your “shadow partner” is exactly the issue of your own “shadow” you just have to face sooner or later, enough to realize that the psychological burden that you place on accusations represents the unresolved personal entanglement in your own subconscious part of the being. Embracing the shadow, accepting the shadow, knowing the shadow is the ultimate result of what has to be done and that is raising awareness, waking up from the unconscious and finally accepting the fact that “you thought you were someone else, someone good”. Essentially, the self-awareness takes place internally as the form of psychotherapy with the aim of comprehension of one’s own true motives and impulsive drives. What seems to be a reward for self-improvement of this kind is the greatest accomplishment of Pluto and that is exactly the diamond as the philosopher’s stone of one’s own accomplished perfection.

Pluto is not a joke, but creates a polygon of the vicious Test that is being preformed for the sake of passing the key task of the Pluto in the words of Don Corleone (the significant name again): “Do I have Your loyalty” since the Code of Honor is exactly in the root of the Pluto phenomenon so well expressed through the lords of the underground. If Saturn evokes the question of Trust, suspicious minds being the apple of discord of so many relationships, the crucial point of Pluto is exactly – The Loyalty. All the game testings that pass through so many “crime and punishment” phases, possibly lasting for a life-time, “love being nothing but a business going on” phenomena, due to the power games of the “Crocodiles In Venice” kind of development, often leading to tragedies, are just the demonstration of Plutonic inexorable will imperatively demanding respect of the Heart-Bond. It all comes down to Respect – sooner or later you play by the rules Pluto demands you to in order to allow you approach happiness.

Within the area of archetypes, the Greek mythology so well expressed the power, the fatality and the so precious love through myth of “Persephone” as well as the myth of “Eros and Psyche”, perfectly explaining the nature of Plutonic love. The abducted Persephone by Hades (Pluto), being the daughter of Zeus, who yields to the destiny of the inevitable and becomes the Queen of the Underworld, represents the metaphor of necessity of acceptance of the unavoidable in every individual chart, i.e. being able to be equally present is both worlds during the day and night represents the balance one has to accomplish between subconscious and the conscious impulses and drives of the psyche. The love that keeps her attached to the underworld is the same Love Fatale of the abducted heart who basically doesn’t rationally choose who to love.

“Eros and Psyche” myth is also a perfect example of the love phenomenon in the psycho-dynamics, whereupon the Psyche is not being allowed to see the real face of the husband, the “monster” Eros thus denoting the true nature of the essential driving force as the source of life needs to remain the mystery, just like the true nature of Love. However, she does make the trespass and sees the true face of Eros, in all his beauty and brilliance, hence being punished by Aphrodite to dive into the river Styx to fall dead, Eros kissing her back to life again for the eternal marriage to come. This very archetypal image represents the heroic deed of the Psyche in its quest to face the true nature of love, being so very Scorpionic psychoanalysis, almost every human being on Earth has faced or is to face in a lifetime, as the ultimately powerful experience of love as the greatest mystery of all.

Being stricken or not, the mystery of Plutonic realms of love remains the power of the united opposites as the greatest magnetic force deprived of immunity for all the human beings that experience the essence of true love. Being the ultimate result of this complex internal process of self-examination and improvement is the transformation that takes place in every individual for the sake of shaping up the personality enough to become balanced, improved and worthy of love. You just want to pass that test, win the game of the lifetime and experience the most powerful love of all. Pluto – The Love Fatale.