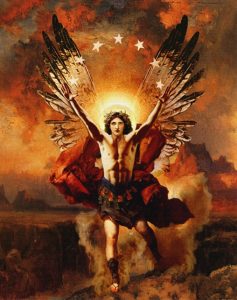 „The more things change, the more they stay the same“ would be the resolution of the upheaval of the four-year Uranus-Pluto Square that has shaken the system of all the establishments whatsoever, however mostly the system of belief, personal philosophy, common sense if you will, in the frame of celestial aspects implying to the cross-examination on a worldly scale thus questioning the „anima mundi“ for the sake of „paying the karma dues“. However, Saturn in Sagittarius and Jupiter in Virgo make sure the „old school“ is being preserved despite of all the backward development of Pluto in Capricorn undermining the universal concepts of Uranus in Aries thus making us „being borne back ceaselessly into the past“ in spite of the „boats against the current“. Or maybe, that is exactly the point.

The concept of Elitism undergoes the test of its own susbstantiality, conveyed by Saturn in Sagittarius in the frame of the Uranus-Pluto Square disclosure of misplaced thesis, and overall threat of the Plutonic-Capricornial Power of the dark side lurking to drag the world down the „rabbit hole“, however You would have to be Alice to play your cards right enough to make a star out of it or else you just might get lost in the Wonderland.

It seems to be just what we need on the individual level enough to test our own limits thus verifying our own system of belief, personal convictions, life-philosophy, the system of values and the way of life with respect to the Quality of Living, Jupiter in Virgo is imperatively implying to, being the only Saving Grace in the times of global crisis, thus calling for the individual effort of self-improvement and personal development for the sake of the collective salvation.

It takes a little of individual workout to ennoble the spirit enough to improve the moral habitus and it is free of charge. In spite of the global consumerism of Pluto in Capricorn draining every drop of sweat, blood and tears out of us for the sake of maintaining the power that is actually not where it seems to be since it is being fed with fears, the real Power resides in Faith,Wisdom, Knowledge,Education and Dedication to universal goals Jupiter in Virgo is reminding us enough to release the fears, suppressed emotions, prejudice and to become a liberated and relaxed enough to create the Free world being the only way towards the happy living.

In the world of inversion on the massive  scale, the Elitism as the concept is suffering a great deal due to the perversion of the original idea, Jupiter in Virgo is making sure of reminding us, such as spirituality, faith, wisdom, moral codes and codes of honor conjoined with the continual self-improvement, purification of shadow, culture, art, social grace with respect to the environmental issues, health and the quality of life, the Elite is being responsible for, on a massive scale, in making a good life no money can buy. It seems as if the former transit of Saturn in Scorpio has drained the resources of spiritually rich by various means of Pluto-Uranus manipulation thus jeopardizing the purpose of the Elite, now being cross-examined for the sake of its own substantiality. If you feel exhausted like you are missing a great deal of your own power, you might consider it as the good investment after all. Due to the Jupiter-Pluto Trine at the moment, the very phenomenon is being justified in the big picture of „all partial evil, universal Good“ concept by Alexander Pope, meaning that no matter how powerful Pluto might be it is still in the service of Jupiter. Now, the Trine is making sure both worlds coexist for the sake of allowing us make the choice. You know that Jupiter is always the winner.

It is so well known what it takes to become High Profile Figure in the contemporary world, as well as ever, this transit of Saturn will show forth in the years to come when the Almighty’s testings  show the natural selection of the best oranges proven worthwhile. Meanwhile, fix yourself a fresh orange juice and don’t fall for everything you hear. Orange is Not the New Black.